Normally when I upload stickers I do so in the order I got them, today I’m making an exception. That’s how special getting Florian Niederlechner’s sticker is. His and the SC Freiburg badge were at the top of my wish list for this season’s album, now all I need is a double of each for the wall and I’ll be happy. It’s funny I got Florian’s sticker today because his parent club Mainz played this afternoon. It’s even more amusing that I got two Darmstadt players and their badge because it was them Mainz drew with earlier.

The Freiburg badge was in between two players who have a Freiburg connection, Salomon Kalou who last season scored a very late and extremely important equaliser for Hertha against them and defender Sascha Riether who used to be a Freiburg player, in fact up until last season. I also got the Bundesliga ball and a shiny version of Robert Lewandowksi, he came out of a packet before Niederlechner yet he goes after him. He may be the best striker in this post but he’s not the most important one: 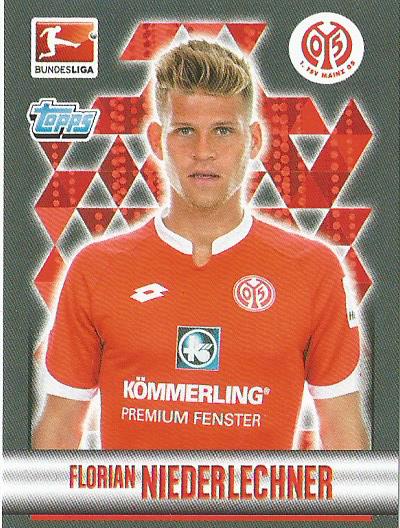 Today’s daily prompt asks you to write about longing, that’s all you get. Just one word, no further guidance. I’ve not written anything for the daily prompt the past few days, I found this new found style a little unsettling. My first reaction was it’s different, I don’t like it. I think I may have found the lack of specific guidance a little unsettling too. I’m getting over that now. I suppose it’s a good thing in one way, no specific question means no rules to stick to. Even more than usual I can ramble randomly.

So just what am I longing for at the moment? Well for one thing a sticker of Nils Petersen. All I have is a Bremen one from last season, I so badly want one of him in a Freiburg shirt. I don’t want to curse it but maybe I’ll get one next season. At least there’s a card of him which I’m getting in a trade, so I’ll have something of him from this season besides his team card. It’s a trade which has proved satisfactory in more ways than one, not only am I getting two Freiburg cards but I get to send a letter to Germany to someone named Andreas. That is just awesome.

Besides a sticker of Petersen I’m not really longing for anything right now. I’m a very good mood. Freiburg beat Arminia Bielefeld 4-1 yesterday and Florian Niederlechner scored two goals. And this time it was a real goal. His first goal was something of a comedy of errors, the keeper dropped the ball into his own net. This time he more than deserved it. I’m particularly pleased with it because Alexander Schwolow is the one who initiated the move. He kicked the ball up field whereupon Grifo headed it and it fell perfectly for Niederlechner to battle for it and then go one on one with the keeper to score. The second one was great too but I can’t help but feel bad because Bielefeld didn’t deserve to lose 4-1. All season they’ve kept things pretty tight defensively speaking including battling hard to draw 2-2 against Freiburg earlier in the season. Even better is the fact Freiburg achieved this victory without Nils Petersen who for a second game in a row was on the bench. It’s good to have another regular goal scorer in the team, it takes the pressure off Petersen a little. The irony of the situation doesn’t escape me, that Niederlechner is on loan from Mainz. Because Mainz is of course a former team of Thomas Tuchel who I like a great deal at the moment. Even more interesting is the fact Niederlechner used to play for 1.FC Heidenheim. On Wednesday afternoon they came close to beating RB Leipzig, being 1-0 up at half-time. Unfortunately they went on to lose 3-1, a shame because it w0uld have been excellent for Freiburg had Leipzig lost.

Freiburg took all three points, maintaining their grip on second place and the Bundesliga provided plenty of entertainment last night too. Bremen orchestrating a teriffic 4-1 win over Leverkusen, repeating their Cup triumph in the league. And Mainz somehow against all the odds beat Bayern 2-1. I feel kind of bad about it because part of me was rooting for Mainz to win. Simply because it would make the title race a little more interesting and adds to the already considerable intrigue around what is arguably the biggest match of the second half of the season, der Klassiker round 2. Dortmund v Bayern. Dortmund have not lost a game at home all season, are Bayern going to bring that run to an end? I also feel bad for Neuer, for him being this angry. Evidently I don’t feel so bad that I can’t make these amusing GIFs:

Like I said above I’m not really longing for anything right now. I have the new Bundesliga album, the Euro 2016 Schoolshop one on the way from Serbia, Freiburg have won their last three games and they play on Monday this weekend. Which means unless I choose to I don’t have to get up early on Saturday or Sunday. Plus der Klassiker to look forward to. So what’s the problem? Well I think I may just be a little too easily pleased for one thing. That’s the negative thought lurking behind my good mood right now. The thought that I should want something more other than stickers and a good football match to watch. In what seemed to be a friendship ending conversation last week I said that I was tired of pretending to be normal or anything approaching it. That I’m not going to waste anymore time on pretending to be something I’m not. I think I may have been a little more blunt than I needed to be but I don’t regret what I said. There’s something I read online which gave me some perspective on the matter. Gist of it was there’s four version of ourselves, different versions that we present to different people. There shouldn’t be a significant difference between the person you are when you’re by yourself and when you’re with your friends. I got to thinking that if there is a significant difference, why are you friends? Surely the friendship is founded upon an untruth if you have to hide who you really are. I don’t know for sure but I can’t help but wonder if the reason I’m feeling so content and relaxed right now is because I’m going to see Hail Cesar by myself tomorrow. If it’s because I don’t expect to have any e-mails to reply to. Like as if I’m free from the obligation and stress of it all. That’s probably telling in itself. That I’m relieved at the prospect of not having to reply to e-mails of a social nature.