I’ve kept putting off writing anything lately, I just haven’t really felt like it. I couldn’t miss putting a post together for last night’s game however, it’s not every night you get to see Nils Petersen in a German shirt. Germany needed everything to go right last night, beating Fiji was never in doubt but they had to do that and score a boatload of goals in the process. As it turns out they did that and the result of the other game went their way too with Mexico losing 1-0 to South Korea.  It was a very fitting location for the game that’s for sure, the Belo Horizonte stadium having played host to another high scoring game two summers ago, Germany’s historic 7-1 destroying of Brazil on their way to the World Cup final. There was one person in the squad for whom the Belo Horizonte will be very familiar territory indeed, the person in question having been a part of the German squad on that day. Though of course Matthias Ginter didn’t play in that game or any of Germany’s World Cup games in fact, he didn’t play tonight either. So I’ve only got the one picture of him, and it’ll be separate from all of Petersen’s pictures. This is Nils’ day and his alone, hence why Matze’s name isn’t in the title either. He’ll get more chances to play for Germany but Nils most likely won’t, so he should at least get the title to himself.

Germany needed to score a lot of goals and they did just that with Nils Petersen getting five of them. It would have been just that little bit more perfect had last night been his first game in a German shirt. Becuase on his Freiburg debut he got a hattrick against Eintracht Frankfurt. And on his official Freiburg debut (because he was on loan the previous season from Bremen) against 1.FC Nürnberg he also got a hattrick and scored a penalty, actually he scored three goals in about five minutes. To get back to tonight all of them were fairly typical Petersen goals, he’s not particularly overcomplicated when it comes to scoring. He’s pretty simple really, you need a goal and he gets it.  That’s to say that none of them were impressive though, the fifth one in particular I liked, the looping head over the keeper. I’d be hard pressed to pick a favourite but I’d probably pick that one.

They should have let him take the first penalty, he’s an excellent penalty taker and hardly ever misses. I think I remember him missing one last year, but he’s usually pretty reliable on that count. It doesn’t matter, he scored the second. It’s been a difficult week but seeing Petersen score all those goals has certainly put me in a better mood. I know what people will say, it’s only Fiji, it’s not the A team and it’s not the same standard as the other international tournaments but I don’t care. I got to see Nils Petersen wearing the German shirt and scoring goals, something I didn’t think I’d ever get to see. It makes it even more perfect that I chose his name to be printed on the back of my Freiburg away shirt, because it’s white just like the German one. On the subject of perfection there is one final fact I have to mention. In the crowd at the game was a boy wearing a German shirt who had a sign saying “1-7 – one more time.” I found that funny and even more so now, he got his wish. But tonight was better for three reasons, Nils Petersen was there, they scored three more goals and even better they conceded none.

This is a picture I won’t get sick of for a while: 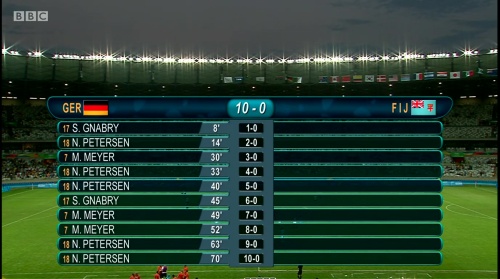 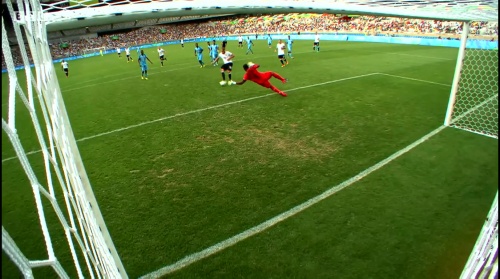 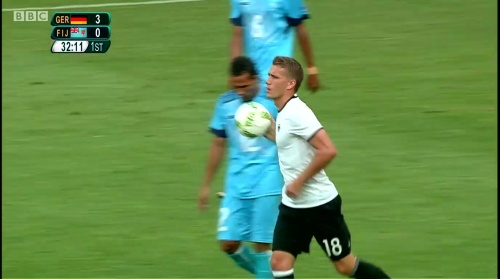 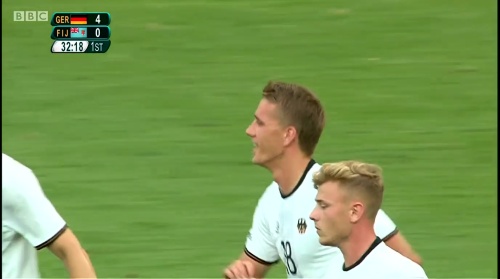 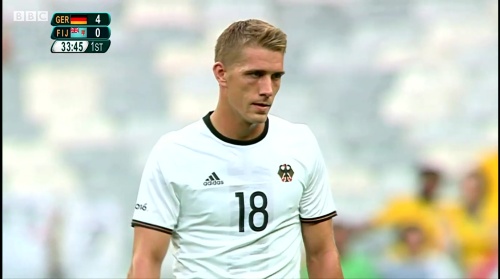 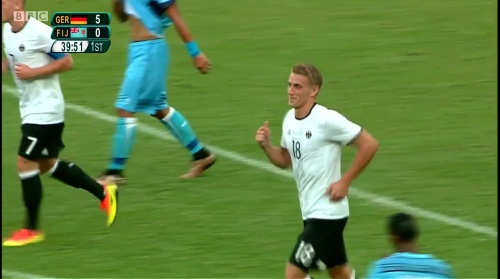 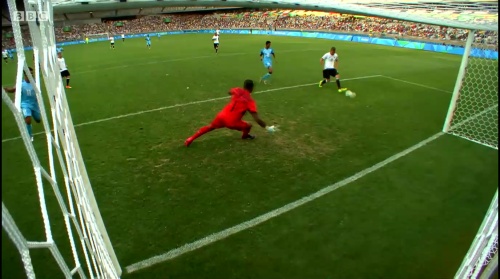 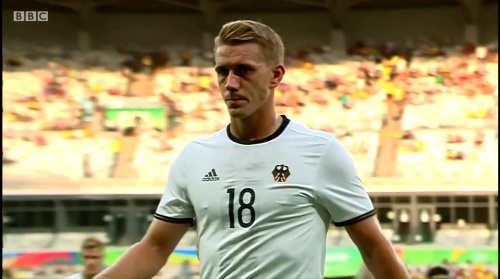 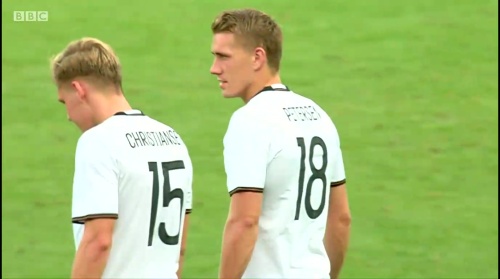 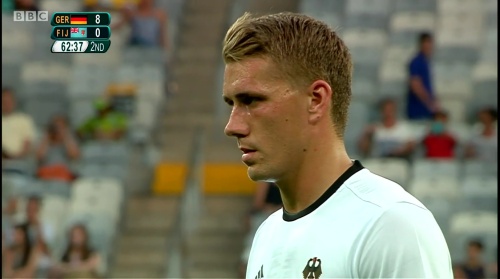 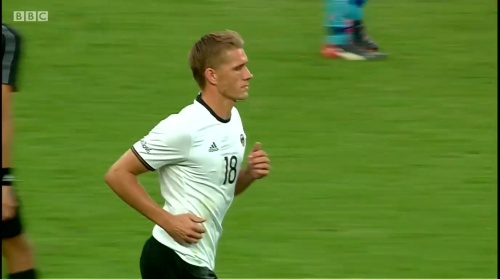 Today is of course one year on from that momentous day on the 8th July 2014. In celebration the DFB have put up another article. It was that article in fact that the title of my post comes from. From this particular part in fact:

“They were 90 history-making minutes in Belo Horizonte – one game which will at the very least produced a turning point for football in Brazil. A lot was written, said and analysed after the game, but nobody was capable of grasping the marvellousness. A newspaper in Germany didn’t ask you “Why”, but it wonderfully and fittingly wrote that German football now had its own moon-landing question: Where were you when Germany beat Brazil 7-1 in the semi-finals of the World Cup? 80 million Germans can answer this question with certainty on behalf of one of their fellow countrymen: Joachim Löw. He was in Belo Horizonte, in the stadium, on, near and in front of the bench. And in seventh heaven. ” 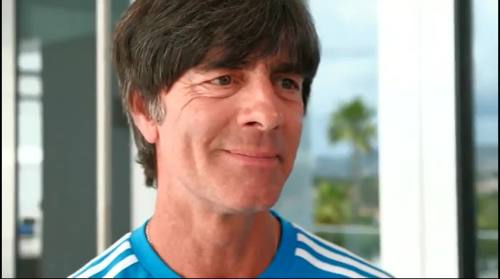 What’s brilliant about that article is that it’s almost a guide to one of my favourite videos.

The level of detail it provides about Jogi, Hansi and their reactions to the game is simply brilliant. Just absolutely perfect. They also noted two things that I didn’t see before, the first of which I’m kind of annoyed at given that I’ve seen the clip of this moment more times than I’d care to count. That is Jogi’s reaction to the first goal. The article puts it better than I can:

“Corner for Germany, 11th minute. Toni Kroos heads over to take it. Joachim Löw gets out of his seat. The substitute benches are low in the ground in Belo Horizonte, so Löw had to climb three steps so that he was at eye level with his players, instead of looking at their feet. Kroos delivers the ball, Löw’s eyes are wide open, his lips pressed together, his hands in his trouser pockets. The coach takes two small steps forward while the ball is in the air. Thomas Müller loses two opposition players and takes two small steps backward. The ball flies into the net, and Löw’s left arm flies into the air accompanied by a primal scream, and maybe a hunch? Löw pumps his arm once, twice… seven times – we’ve counted. He then forms a fist and gives a thumbs up. Löw’s celebration of the opening goal ended with a ritual that would be repeated later: A sip of water from a bottle. ”

They also noted that after the fourth goal, when Jogi went back to his seat, Hansi pats him on the shoulder, exactly four times. It’s the kind of thing I would a get kick out of, little details like that. Which is why it’s so annoying that I didn’t notice that, it’s exactly the kind of thing I would usually notice. One detail that hasn’t escaped me however is the fact that this is post number 547. To think if I had written something for the daily prompt before doing this, that wouldn’t have been so.

One final video, an interview with Sami Khedira:

Today however is not only about 2014. Today also marks 25 years since the 1990 World Cup victory against Argentina.