These past few months I’ve had very low expectations of myself and the past few weeks that’s been true more than ever. The logic is simple, keep expectations low so that way I won’t be disappointed when I fail to live up to them. This week all I have to do is write one small letter, I know it’s only Tuesday but I’m already beating myself up for not having gotten it done. All this time thinking about it and I could have just written the damn thing by now. Yet it’s not so easy, not least (and I’m aware this sounds absurd) because I don’t know what to say. Or rather I know what to say I just don’t know how to put it, how to make myself come across politely. I’m used to things making me feel stupid in some way but this is something else, it’s making me feel like words aren’t my friends either. It’s had the effect of not making me want to write anything, though I can’t blame that for not posting anything on here, I haven’t felt particularly motivated in that respect anyway. So unmotivated have I felt on that count I’ve stopped bothering to make excuses to myself as to why I haven’t done so, nor did I make myself promises, saying that I would try the next day.

When it comes to this stupid letter however I have made many excuses and found just as many distractions.  First of all falling back on the usual tried and tested methods such as looking for new Jogi pictures, sorting stickers and then resorting to sorting out the ever growing list of recordings on my hard-drive. The latter provided quite a bit of fun, I’d forgotten about all the Copa America games I’d collected last summer and the fact that it wasn’t all doom and gloom. As for new distractions I’ve spent quite a bit of time dreaming about Freiburg’s Turkish defender Çağlar Söyüncü. In my story I paired him up with Alexander Schwolow as friends simply because that’s how I wanted things to be. And it turns out they have quite the budding friendship in real life, at least on the pitch anyway. It’s one of the things which has cheered me up somewhat this week. I always like getting pictures of my favourite players but these were extra special, and just to make it a little bit more fun I made a GIF too: 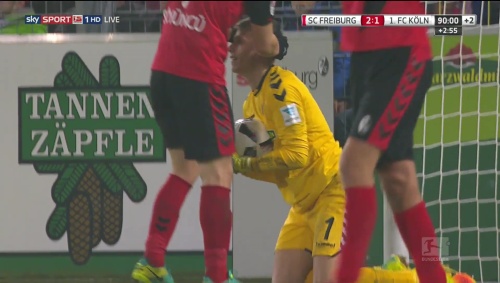 I know I’m getting ahead of myself seeing as there’s still fourteen matches to go of this season but I’ve already made up my mind, the name on my home shirt next year is going to be Söyüncü. In one way I suppose that’s a good thing, the idea that I’m thinking ahead, even if it’s only in a football sense. Thinking ahead to next season means a part of me is planning on being around that long. Even if I don’t feel like it’s true evidently another part of me knows better. I can’t say that I’m feeling any better though because that wouldn’t be true at all. The feeling that I’m sleepwalking through everything won’t go away. Even when I’m watching Freiburg play I feel like I’m not quite all there. I start off feeling fine but the longer the game goes on the harder it gets to keep paying attention to it and my mind ends up drifting.

I thought all those feelings might disappear when I got some sleep but in retrospect I don’t think the sleeping tablets helped that much. For one thing without them I’ve fallen back into my old routine of sleeping in the day and being awake at night, and for another I didn’t like the way they made my head feel. They helped me get some sleep and actually at night-time too, problem is I felt sleepy in the day as well, even with just a half dose. But it doesn’t matter in the long run anyway since they could only be a temporary solution. I’m not quite sure where all this leaves me now or what if anyhing to do next. I’m not keen on the idea of going back there again. I’m not sure listening to someone tell me that at least my speech is good, there must be good things about having autism and that I should just do the things which make me happy is going to help. Great, so I’m capable enough in terms of speech and expressing myself to say that I feel like I don’t want to be alive anymore but I can’t articulate why. And of course I have to live with this, with everything not making sense. I can imagine their answer to that too, things like this don’t make sense to anyone and it’s difficult for everyone. I have no idea if that makes any sense, I hope it’s not descending into rant territory anyway because I said I wouldn’t do that today. I’ve aleady exceeded my rant limit by ranting about Leipzig and last week’s events.

Whatever the answer to any of that there’s one thing I know for definite, I can’t do something because someone else thinks it’s a good idea or it’s what I should be doing. If I write something it has to be because I feel like it. Forcing myself to write could end up making me hate it and were that to happen I’d pretty much be left with nothing. Football is a good interest to have right now but it’s nothing without the stories. If I lost the stories I might actually start to feel lonely. I know I feel a little lonely even with them but not quite so much. At least when there’s always at least one character living in my head then I always have someone to talk to. And I don’t have to worry about what time of day it is. People don’t like being woken up at 4:00am unless it’s a real emergency. And apparently having an existential crisis isn’t an emergency, nor is finding a new Jogi video either.

Normally I would say that the week can’t have been strange because everything is always strange. Yet after last weekend’s events I think I can say just that. I’m not sure what result was more surprising, Dortmund losing 2-1 to Darmstadt or RBL losing 3-0 to HSV. The former resulted in the commentator saying that sometimes things happen in football which can’t be explained. The words stuck with me, as did the fact Darmstadt won at all. Surely given their perilous situation they can’t possibly survive, it makes me wonder if there’s a message in that, sometimes even the loser gets to win. As for HSV that was a different kind of incredible, no-one would have predicted them being the team to breach Fortress Leipzig, or doing it in the way they did. It led to me coining the phrase “Holy Hamburger SV Batman.” Which sums up effectively the weirdness of that situation, and just to make it a little more interesting one of the goals was scored by Kyriakos Papadopoulos who spent some time on loan at RBL earlier this season. He was of course on loan from Leverkusen and he scored against them too. It’s exactly the kind of trivia I love. In that sense I’m glad I still care enough to remember such things. The day I stop caring about random facts and trivia is the day I know all is lost.

One response to “Lowered Expectations”