I haven’t written anything for the past few days, I’ve had ideas but every time I actually sit down to get started nothing happens. I decided to write something today because I’m worried I might get out of the habit. Taking a break from something is not necessarily a bad thing but with the way I feel it wouldn’t be a good idea. At the moment if I stop doing something then it’s very difficult to get back to it. I take any excuse to get out of something and then can’t get used to it again. Other than writing top of the list is being around other people. I can’t say I’m lonely because I have no idea how I feel or what I want. None of it makes any sense to me but then when do feelings ever make sense. I’m sure I’m putting too much thought into the matter. It’s a bad habit of mine. Self reflection can be a good thing but like everything else I take it to the extreme. Surely there’s a balance to be found between my obsessive over analysing and not thinking about or dealing with reality at all. If there is I haven’t found that equilibrium yet.

On the matter of thinking too much I wasn’t quite sure what pensive meant so I looked it up in the dictionary, only I didn’t find the definition there helpful so I googled it instead. I shouldn’t have done that because doing so created another thing for me to overthink. There’s so many different definitions and so many of them say different things. So how do I know which one of them is right? It made me think, how many other words are there that you use but don’t really know what they mean? Sometimes the entire English language feels that way, as if I don’t know what I’m saying, just that it’s the right thing to say. All this because I wasn’t sure what a word meant. At least it’s not as bad as yesterday. I went to see a film called Our Kind of Traitor and I really wish I hadn’t bothered. I didn’t enjoy the film and I now hate the sight of Ewan McGregor, plus it made me dislike Stellan Skarsgard which is not a good thing at all. What bothered me the most is the fact halfway through the film I started thinking about what the point of being there was. What was the point of seeing a film which just reminded me of several other films. Why bother watching films at all. Such thoughts of course led to me thinking why bother doing anything. I wasn’t in such a bad mood when I went out so I don’t know exactly where all those thoughts came from. At least if you cry at the cinema no-one bothers you and it was a film which had some sad moments too so I had a good excuse.

I can’t solve that mystery right now but at least I’ve written something today anyway, so the day’s not a total write off. Though even if I hadn’t done it wouldn’t have been anyway. No matter what else happened today could not have been a bad day, not when I got the all so special addition to my collection. Is it crazy? Beyond any doubt. Could the money have been better spent? Absolutely. But no amount of logic was going to stop me from getting this collectible. Getting it doesn’t fix everything, the happiness it provides will be short-lived, I know that. But I don’t want to think too deeply about it, that always leads to trouble. Right now I just want to enjoy how happy I am at getting this wonderfully awesome addition to my collection and to look forward to the DFB Pokal final which is on Saturday night. I would say I’ve crossed a line by buying a shirt actually worn by Jogi Löw but then I did that a long time ago. About eleven months ago to be exact. Back then I obtained a training shirt which once belonged to Hansi Flick. So in the words of Joey from Friends “Over the line, you’re so far over the line you can’t even see the line. The line is a dot to you.” I said a while ago when I bought my first white shirt that I wasn’t that kind of obsessive, making it clear that it was a shirt like Jogi’s, not actually his. This time however it really is his. So I guess I was wrong about that. I suppose there’s little difference between this and buying a Ginter match-worn football shirt. I mean it’s not like I’d ever get such a thing of Jogi’s so I guess this is the next best thing. Or maybe that’s just my attempt at rationalizing what is obviously a crazy addition, even for me. Either way, who cares. There’s not a lot which makes me happy in life, even if it’s only temporary I’ll take it. I think actually this is all there may be, this is what life is. Real life makes me unhappy or something goes wrong, then I get a new collectible or see a great match and then forget all about reality for a while. 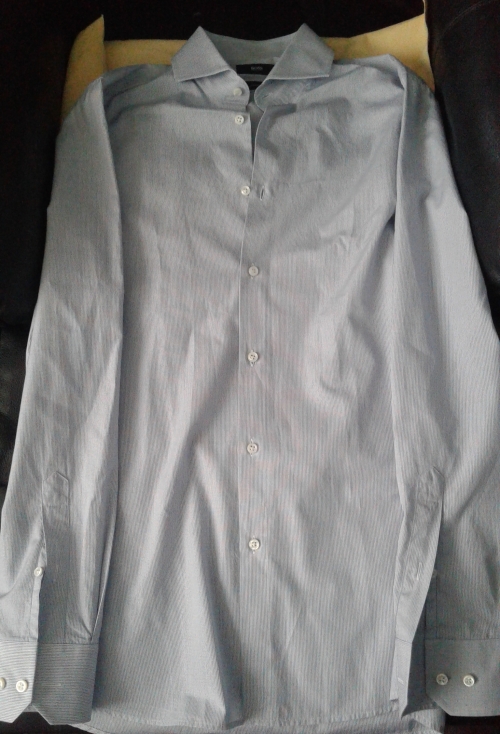 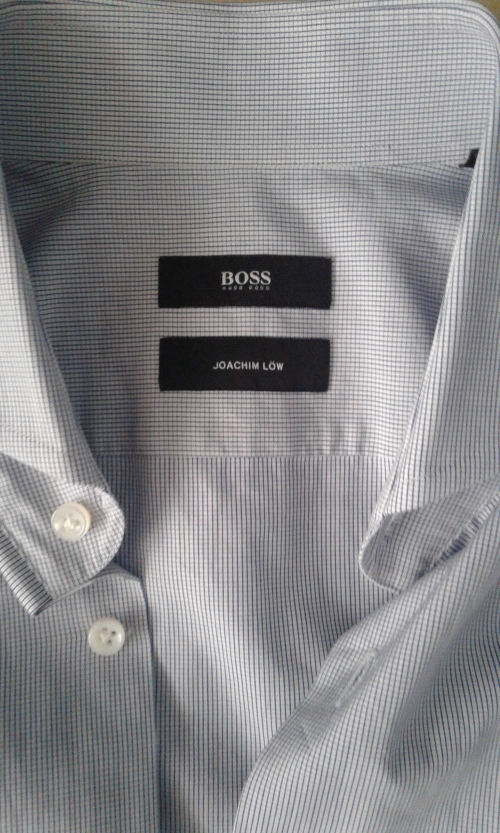 It’s not the only collectible I’ve gotten recently, the other one is a great deal smaller but no less important. No matter how bad I felt yesterday I could not fail to be cheered up by this. Finally I got my very own Lego Man Jogi. I still can’t stop thinking how they missed an opportunity, Lego Man Hansi would have been brilliant. Him and Jogi standing side by side, just like it should always be, even in Lego form. As things stand there is of course no Lego figure of Hansi but then there’s not one of Schneider either which I’m naturally grateful for. Instead Jogi is standing next to Manuel Neuer. It bugs me that they’re all the same height, Manuel Neuer is way taller than everyone else but not in Lego form. I’m overthinking this I know but then what else is new. 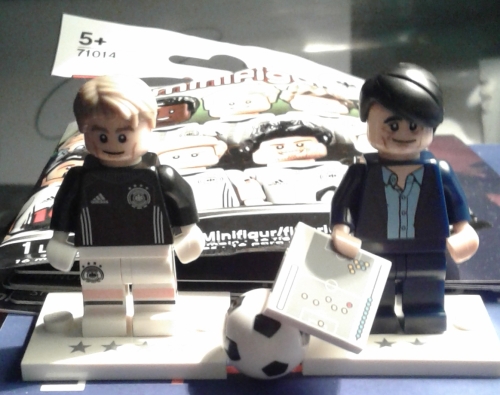 4 responses to “Thinking too Much”