One of the first things that came to mind when I saw today’s prompt was an episode of The Big Bang Theory. To cut a long story short Sheldon gets fired from the university and has to apologise to the president Dr Gablehauser, which he only does because his mother makes him. During the meeting which he apologises Sheldon’s mother lands herself a date with Gablehauser.

Sheldon was recounting this event to Leonard who asks what happened, the following two final lines of the conversation are what’s relevant here:

Sheldon: I’m not quite sure. It involves a part of the human experience that has always eluded me.

Leonard: “Well that narrows it down.”

You could easily say the same about me, there are many aspects of the human experience which baffle me too. Including the concept of friendship. How I managed to not only make a friend but keep that friend for several years is a mystery to me. I really have no idea what I’m doing, not then and not now. As things stand I’m not sure I have any friends left. A few months ago I’m sure I would have been upset at the prospect of such a thing, not so now. I’m unhappy when I do have friends (not to mention confused) and no happier when I don’t. I’m not sure it makes any difference. One thing for sure is I know I’m not good at this or at talking to people at all. However did I think I could keep a friendship going (and understand what I’m doing) when I find it difficult writing a short e-mail to someone. Why is it so hard to find the right words and to be “friendly?” It never seems to get easier. You read books about it, study other people’s interactions and it doesn’t help. You still don’t feel comfortable or end up second guessing yourself. It’s hard to work out if I enjoy having friends or not when it’s such an anxiety provoking experience.

One thing I know for sure is that imaginary friends are the best kind of friends. Nothing to worry about there, no saying the wrong thing or misinterpreting something. It’s not perfect but then what is? In a way imaginary friends can make you feel even more lonely. As if they are a reminder of what you can’t have. But then I feel that way with actual people too. As if there’s something I can’t quite understand, like as if it’s not really real. I don’t know, it probably doesn’t make much sense. There is one thing that most definitely makes sense right now, something which requires no figuring out on my part. Freiburg’s hard earned 1-0 victory over their neighbours KSC. I said in yesterday’s post that one goal would see them go back to the top of the table. One goal would see them be once more “der Tabellenführer.” They did just that, scoring only one goal courtesy of Mike Frantz. Which means they go into the international break ahead of RB Leipzig. Now I’m still not particularly looking forward to the upcoming internationals but I am exceedingly happy about this: 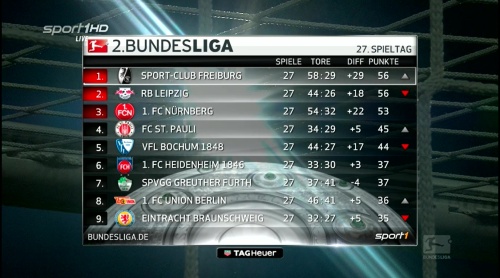 This entry was posted in Autism, The Daily Prompt and tagged Autism/Asperger's Syndrome, Friendship, SC Freiburg. Bookmark the permalink.

One response to “Friendship”