The Scarf Bet/One Year and One Day

Plan the ultimate celebration for the person you’re closest to, and tell us about it. Where is it? Who’s there? What’s served? What happens?

When I first saw this I thought I had nothing to write about. Which would have been disappointing because I really wanted to write something for the daily prompt today. I would have liked to have done so yesterday since it was then that it was one year, but today is in a way even more perfect. Since it’s not only one year and one day since I started writing the Löw adventures, it’s also my birthday and Germany are playing France tonight. Also Bosnia are playing Ireland in their qualification play-off for the Euros next year. I hope all goes well for Mensur Mujdza and his Bosnian compatriots.

I wouldn’t throw anyone a party, ever. Not even if there was someone I was close enough to. So I have nothing to write about in that regard. I can however write a little something about tonight’s celebrations. It’s not in celebration of a person, not exactly, it’s more a celebration of an idea. Of the idea of the Löw adventures. Where else would I be on match-day but in front of the TV, well my laptop this time since it’s on German TV. As for who’s here, no-one but myself and my mascot Manuel. He won’t steal any of my snacks or ask stupid questions. We have pizza with meatballs and also double chocolate chip cookies, still warm from the oven. And specially ordered crisps from Germany.

Also on it’s way from Germany is my new shirt with Ginter on the back, unfortunately not here in time for the game but as long as it gets here.

As for what’s happening, football. And a little something special. A new Löw adventure to mark the day. But first a few pictures. First of the gift that did get here in time, my new scarf which amusingly enough there turned out to be two of, so I gave one to my mascot to wear. Also one of the football themed cake I got decorated with a few extras. I may not like parties but doesn’t mean I’ll say no to cake: 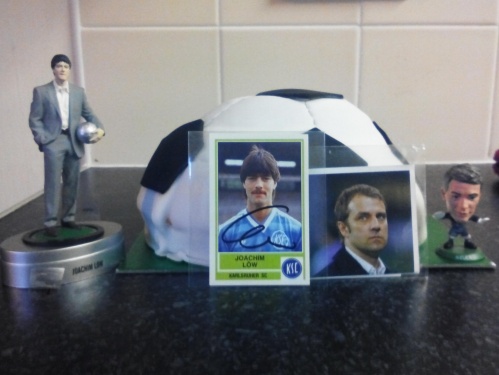 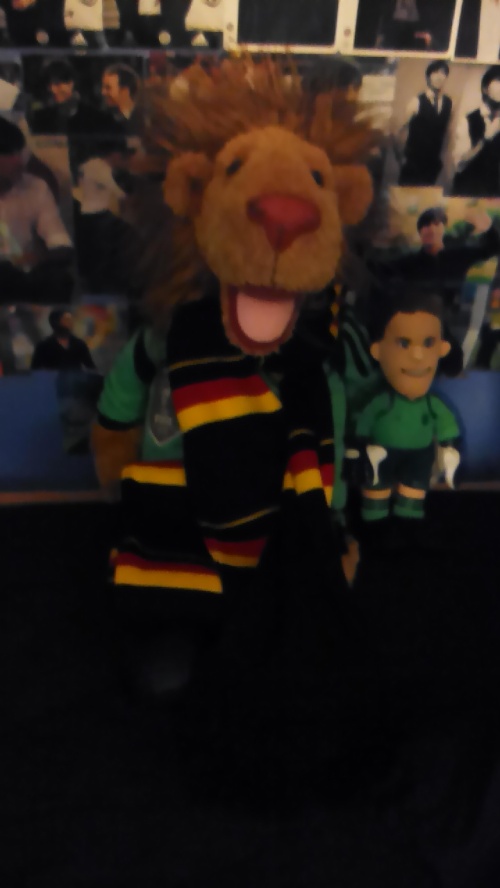 And secondly a picture of the scarf of Jogi’s which gave me the idea for the following story: 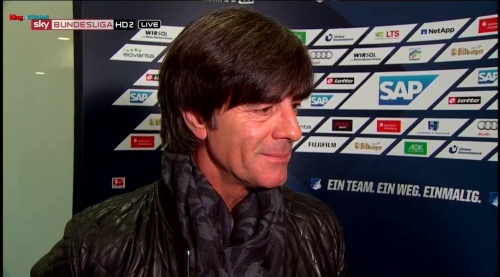 One of the things Hansi loved most about Jogi was his obsessive focus, the way in which he devoted himself completely to whatever he happened to be interested in and especially so when it was directed towards his own self. As it usually was in situations like this, but right now Jogi wasn’t focusing on him. He was here lying beneath him, indeed having some fun right now had been Jogi’s idea but his mind was elsewhere. And given what he’d spent the weekend obsessing over, Hansi had a pretty good idea what was more interesting than himself this minute. Despite his distraction Jogi was paying enough attention to notice when Hansi was no longer there and made no secret of his displeasure. The second Hansi lay back next to him Jogi grabbed hold of his hand and placed it back where he wanted it.

“I thought we were going to have some fun, Hansi.”
“I thought so too, but not when you’re thinking about something else.”
“I’m not; I’m trying not to anyway.”
“You’re thinking about scarves right now, aren’t you?”
“Yes but I’m trying not to.”
“And you’re not thinking about all the fun we could have with some very special scarves now, are you? You’re thinking about the game, about what scarf to wear.”
“And you say Hansi doesn’t know everything, I think he does.”
“If I knew everything I would know how to get you to stop thinking about scarves and start thinking about me.”
“Get back over here and I’ll soon be thinking of you.”
“No you won’t, not until you’ve picked a scarf. I think you need to make it up to me.”
“How do I do that my scarf prince?”
“You think Wolfsburg will beat Bayern tomorrow, don’t you?”
“I think so.”
“How about this, if you’re wrong, if Bayern win tomorrow night, I get to pick your scarf for the game.”
“And what about if I win?”
“In that case you’ll have to come up with a suitable punishment for me. A suitably devilish one, something befitting my scarf lord.”
“Ok, you’ve got a deal.”
“Just one more thing, you have to stop thinking about scarves right now.”
“Even if I wanted to use one of those scarves on you?”
“That you can think about. You know given the bet we just made, I think you should come to the game tomorrow.”
“No, I’m staying here.”
“Even if I promised we could wear matching scarves.”
“Still no. But you’ve just given me an idea. If I’m right, if Bayern lose, then the next time you come to a game with me you have to wear a Freiburg scarf.”
“Even if it’s not a Freiburg game?”
“Yes, that makes it even more fun. You having to go to a Bayern game with my team’s scarf wrapped around you.”
“That’s not what I was expecting, I thought you’d come up with the idea of some special scarf time.”
“We can do that too, you don’t need to lose a bet to get that. In fact you don’t even need to ask.”

Hansi may not have much time to come up with a plan but he’s not going to let that or anything else stop him from gaining maximum enjoyment from this. In actuality Hansi’s not sure what he’s more excited about, the prospect of getting to choose Jogi’s scarf or getting to win a bet against him. Both are exceedingly rare events and almost equally special.

Every spare moment he has he spends online picking a suitable scarf for Jogi’s punishment. Looking through them it’s difficult to prevent his mind from returning to thoughts of the previous night. Jogi may be wrong in his score prediction but there was one thing he was right about last night, Hansi needed neither to lose a bet nor even ask for some special scarf time with his scarf lord. That he got without saying one word.

None of his words however had succeeded in convincing Jogi to come with him this evening. Hansi would have loved for him to come anyway but now he had some extra motivation. It would have been perfect, Hansi could picture it. At the final whistle him getting out the special scarf and tying it around Jogi’s neck before he knew what was happening. With Jogi refusing to come he would have to settle for texting him the second the game was over and showing him the scarf later that night. Of course what Hansi didn’t know was that he wouldn’t have to wait that long, he wouldn’t need to wait until the final whistle for the result to be beyond any doubt. Ten minutes is all it took for it to be decided. So fast did it happen that Hansi was unable to text Jogi when each goal was scored, not something he would normally do but at half time he had been thinking of doing just that should Bayern equalise and then score the winner. Because it’s what Jogi did at half time, lording it over him that he was going to win the bet.

Come the end of the game Hansi did no such thing, all he did was text Jogi a picture of the new scarf along with six words “Enjoy your new scarf Captain Löw.”
It doesn’t take long for Jogi to reply and it’s not difficult for Hansi to imagine him furiously tapping out the message.
“This isn’t funny, Hansi. I have to wear that on TV tomorrow night.”
Hansi’s equally quick and equally pointed response is “Bet against Bayern and pay the price.”
“You’re really going to make me wear it?”
“I am, in fact when I get back tonight I want you wearing nothing but that scarf.”
I guess you’re the scarf lord tonight.”
“I guess I am.”

The whole way home Hansi thinks of nothing but Jogi and that scarf, if things go his way he’ll not only get to see Jogi wearing his new scarf but may get the bonus of some extra time with his scarf lord. The long journey passes by quicker than he expected for lost in dreamy thoughts about the scarf in his hand nothing else exists at this moment, nothing but the wonderful pictures in his mind. Whether Hansi had won or lost this bet it would have felt like winning, how could it not when either way he got to go home to Jogi.