In a friendly yesterday afternoon Freiburg presented the new shirts for the upcoming season. They look pretty cool, both the home and the away one, in fact I like both of them so much that I can’t pick which one to buy, so I figured I’d get both. I have to wait a week until I can order one but it’ll be worth it. I just don’t know yet if I can buy both at the same time or if I have to wait a few weeks before buying the away one. Whatever happens, I know for definite I will at least have the home one by the time the season starts, that’s something at least. I’m putting off getting a goalkeeper’s one for the moment, not just because of the money, I don’t want any reminders of Roman, not just yet. Another choice to make is what name to get on the back, Mehmedi would have been my first choice but that’s obviously no longer an option. I did say if I couldn’t pick a player I would just get Löw put on there, that would solve the dilemma and would be cool. The advantage of buying both the home and away shirt means that I can have two choices, but who to put on the second? If the news about Petersen is really true, then I’ll get his name on there.

I want to make doubly sure it is before deciding, I just read online that Nils Petersen is returning to the club from Bremen. I read it on kicker, on the club’s website and it was on their twitter page. And yet still I can’t believe it, it’s a piece of news that is so terrific that I really can’t believe it.

Yesterday’s friendly was their second game in the preparations for the new season. Their first game was against Kehler FV, they won 4-1 and Maximilian Phillip got on the score sheet.

To get back to new signings, they’ve also signed Lucas Hufnagel from SpVgg Unterhaching, Marco Hingerl from Bayern and Patric Klandt from FSV Frankfurt. Klandt is the one of most interest to me since he’s a goalkeeper, he’ll be fighting it out for the no.1 jersey with the returning Alexander Schwolow who spent last season at Arminia Bielefeld. Experience vs youth, Klandt spent the last seven seasons with FSV Frankfurt and was for each of those seasons their highest rated player. He joins Freiburg after his contract with Frankfurt ran out. Talking about goalkeepers, Mitchel Langerak is apparently leaving Dortmund for Stuttgart. I thought he would leave, what I want to know now is are they going to sign a replacement and is that replacement going to be meant as a back-up to Roman Bürki or as a contender for the no.1 spot. And what does it mean for Weidenfeller and his chances for redemption, will it be a battle of the Romans for the top spot now? 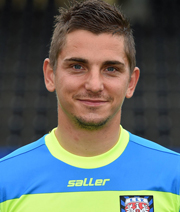 The presentation of the new shirts:

The away one in particular is very nice and reminds me a lot of the shirts from Sami Khedira’s charity match a few weeks ago. I like that it reminds me of that, now whenever I wear it, it will remind me of getting to see Jogi play. Pictures from the club’s website:

Having seen the new shirts and hearing the news about Petersen, I certainly feel a whole lot better than I did a few hours ago. Earlier I was despairing over not having my plans for the upcoming week all worked out already and about not getting to have my Minions Monday. Now I’m not quite so upset about having to wait a few more days to see the film, a Minions Thursday is just as good as a Minions Monday, it’ll be even better since the day will end with seeing the Niki Lauda documentary. I’m just going to make my own plans, you can’t spend too much time waiting around for other people nor can you spend your whole weekend despairing over the fact that people don’t always do what you want them to. Enough already, just make other plans and find other stuff to do. Hopefully I’ll get to see some pre-season friendlies to fill some time, I would really like to see Bürki’s first outing for Dortmund. It’ll make me a little unhappy to see him in another team’s colours but I can’t stop liking him, I just can’t. I know I shouldn’t even be looking but I couldn’t resist finally seeing him in his new colours: